With the recent versions of Visual Studio (and especially the latest 2019 version), it has been easier and easier to dockerize a aspnetcore application. It can now create for you automatically the Dockerfile, helping you to get your application running in a container in minutes without any Docker knowledge!

However, the default Dockerfile only contains what is necessary for building dotnet app, but nothing yet for the react SPA app (or any other javascript SPA framework) as we can see on opened Github issues #5417 and #5450.

While waiting for a more generic solution, we can still appropriate ourself of what is done in the Dockerfile, add the necessary tools for building the react SPA app and optimize its content.

This part is super simple, start by getting the dotnet sdk (using choco install dotnetcore-sdk for instance? :)

The latest sdk is not working with Visual Studio 2017. You might want to install the 2.2.107 version 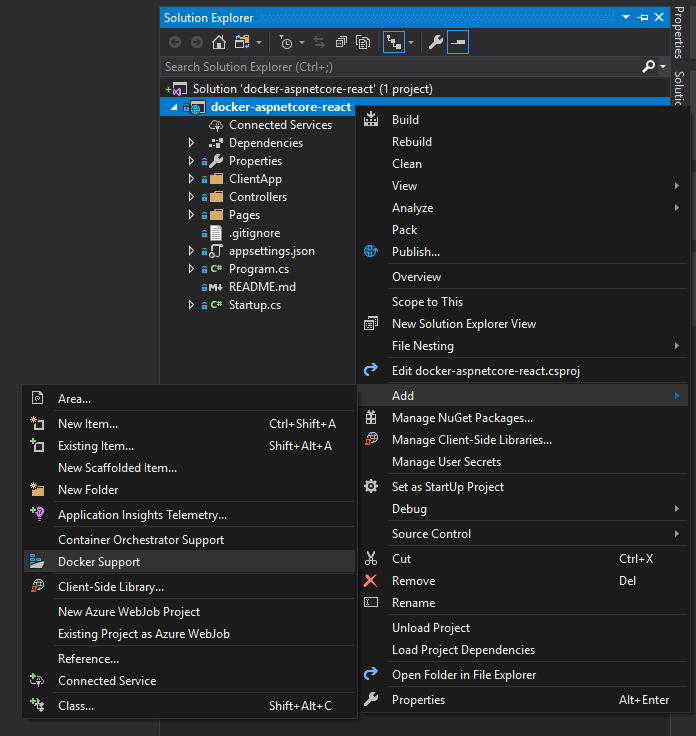 Select then the Linux option to create a Linux container. (Windows container could be the subject of other blog articles)

Visual Studio should add to your project some MSBuild properties, some launch-settings as well as a .dockerignore file and a Dockerfile.

Oh no! npm command line was not found…

Let’s see how to fix this!

The problem is just that Node.JS is not installed in our build container, so npm install and npm build cannot be executed to generate our react SPA files.

For that, we need first to add the command lines to install Node.JS in the Dockerfile of our Ubuntu build container :

These 3 lines are the minimum required to installed nodejs on our Ubuntu container. This should enable us to run npm command lines.

But since we are at it, let’s do some optimization on our Dockerfile in order to make it build as fast as possible!

This should do the job, and skip copying megabytes of data and thousands of files! That’s a good first step :)

For the second optimization, you need to understand a important particularity of building docker images: The docker images are built step by step (i.e. line by line) reading the Dockerfile, and more important, if no changes have been detected for this particular step since the last time the image was built, the build step will be skipped, and retrieven from the cache (in just single digit milliseconds). So rule is to put steps which are not changing very often first, and put varying steps at the end of the Dockerfile.

For instance, you can find such optimization in the Dockerfile for the aspnetcore app: The .csproj files are first copied, then a dotnet restore command is executed restoring all dependencies (which should not necessary change very very often). Few steps later the whole source code is copied (which is supposed to change for each commit), and then the build happens.

Let’s to the same for our nodejs project: Let’s first copy the package.json and package-lock.json files, run npm install, and then let the build happens! For this we need to add to our Dockerfile:

And yeah! It is now working!

To go further, we could see how to run our dotnet or javascript tests from docker, and how to get the results for publishing them (on Azure DevOps for instance ? :), or how to add some https support from our aspnetcore app in Docker, but these are subjects for futures articles!

May the code be with you!

Azure Pipelines: How to add a build agent with docker-machine [docker]

Kubernetes: Get a new environment for each Pull Request using Review Apps [docker]

Kubernetes: Are containers useful for a (dotnetcore) developer? [docker]