Next step after building a container: running automated tests from it

After getting your Docker build automated in Azure Pipelines (by following the article Optimize ASP.NET Core SPA container with Visual Studio for instance :), you are now wondering how could you automatize the execution of your tests in this Pipeline ?

Easiest way to run tests from a container: Run them during the build!

First way is also the simplest: like you would do with a normal non-dockerized build, you could just run your tests in your container right after building your solution. You could then get the test results from your container using the docker cp command and upload them to your Azure Pipeline (and make it fail probably :))

Although this technique is pretty straightforward, 2 things are actually bothering me :

Well it bothered me until I was told about multistage docker builds and especially about targeting a particular stage! Let’s see about this in details.

Generating 2 images: One for test and one for production using multi stage docker builds

I was already using multi stage docker builds, in particular for getting a clean production image, not polluted by all the tools necessary for building my application. However I didn’t know that I could target a special stage and stop the build at the end of that same stage!

Great finding! With this in mind, we are now able to launch 2 Docker builds:

Cherry on the cake: thanks to the system of Docker build layers cache, all of the steps performed during the first build will be almost instantaneous when performed again in the production build as the steps cache will be used!

So let’s resume the global workflow of this approach:

Add a Test stage in the Dockerfile to run the tests

This instruction will run the dotnet test command at the container execution, producing .trx tests results files inside of the /testsresults directory of the container.

You should then be able to upload all the .trx files to the Azure Pipelines, storing tests history, enabling to fail the build, etc. 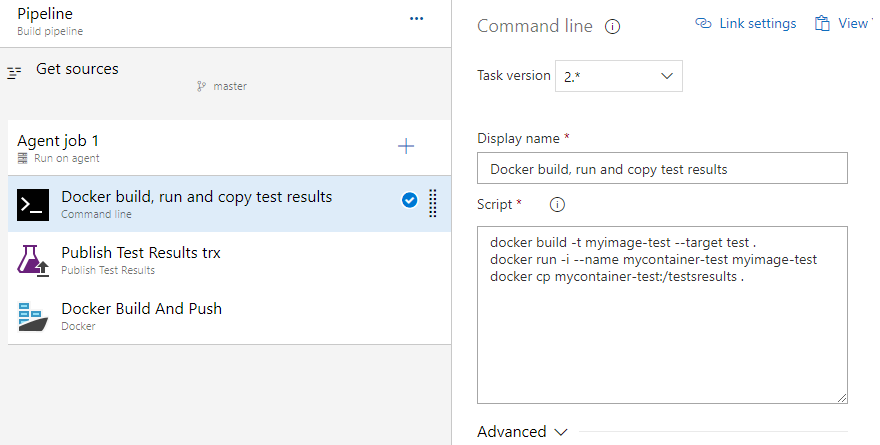 As it is right now, the tests results are stored directly in the build workspace, which is an easy way to manipulate them, but prevent Docker for reusing some cache as during the COPY . . step, Docker will copy your tests results inside of your container, thus detect change and rebuild your project…

So in order to prevent this behaviour, one simple way is to store the tests results outside of the workspace, or more precisly one folder upper in the hierachy. To do that we just need to change the following line:

And then modify the Publish Tests Results task Search folder to look for in $(Agent.BuildDirectory) which is the folder above where the source code is pulled. 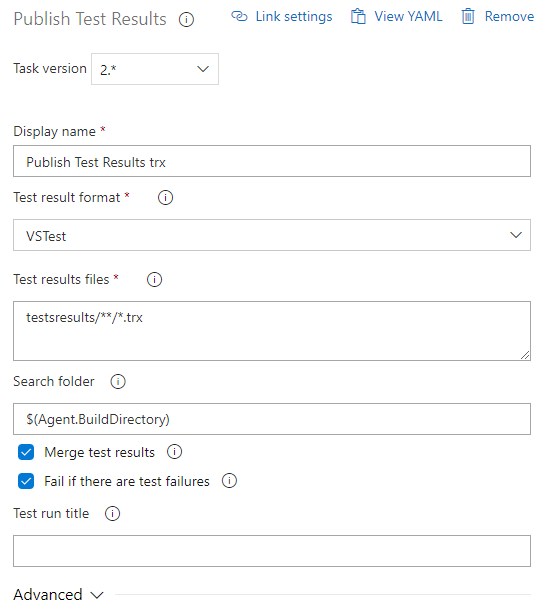 To go further, we could also add the JavaScript tests results as well, which mainly consists in:

I hope this short article gave you some ideas about how to deal with your tests in your Docker project.

As usual, you can find a working example on Github

Next time I would like to give a practical example of adding https to a aspnetcore docker container as it is not so trivial all the time.

Feel free to reach me out on twitter or anywhere else, and May the code be with you!

Azure Pipelines: How to add a build agent with docker-machine [azure-pipelines] [docker]

Kubernetes: Get a new environment for each Pull Request using Review Apps [docker]

Kubernetes: Are containers useful for a (dotnetcore) developer? [docker]